Down the Scott Hole Pt 1: Walker's Memory loss on China...

I took a well-deserved break from the Fitzgerald/Vos/Walker/Trump madness, but...found out there's no escape and they never take a break.

Scott Walker has revealed who he really is on twitter over and over again; a political hack lacking any self-awareness. At one time, we didn't know for sure, because Walker's handlers shaped a more ambiguous public response to questions. What we've seen from him on Twitter has been shocking and embarrassing for Wisconsin.

Walker's biggest talking point at "WALKERGROUP" relayed this wishful thinking; "Wisconsin had become a beacon for private sector investment that led to prosperity for hard-working families." Seriously? And yet, those same "hard-working families" are still feel left behind, resentful, angry, while still making a minimum wage that hasn't gone up in over 10 years losing 16 percent of their buying power.

So I couldn't let the following twitter thread disappear without documenting it below. Here's the jaw-dropping tweet from a very forgetful Walker, who's not all that smart: 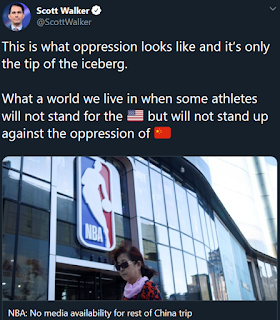 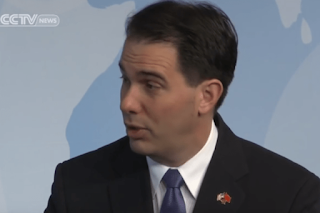 Here's what real oppression looks like beyond Walker's ironic inability to recognize how "capitalism," and the NBA, took sides with the China for the love of money, and not Hong Kong's protests to protect civil liberties. It gets messy when reality meets up with meaningless GOP talking points...women held in a cell at the U.S. border...: 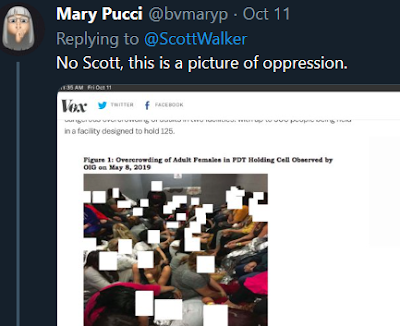 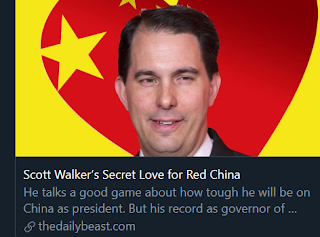 Walker brushed off his party’s concerns about trade with China, downplayed citizens’ worries about outsourcing, and called the country’s trade practices “good and fair.” That governor was Scott Walker—the same governor who, on Tuesday, confused just about everyone by saying Obama should make the Chinese president cancel his upcoming state visit. Same guy.

According to one analysis, the Badger State lost more than 60,000 jobs during his tenure because of the growing Chinese trade deficit and the country’s currency manipulation.

Walker’s 2013-2015 biennial budget proposal included a provision that would have foreign individuals and corporations own unlimited amounts of land in the state, even if they didn’t live there. “[T]here's no question that this would allow the Chinese government to buy a big chunk of land in northwest Wisconsin if it wanted to,” said Republican then-state Senator Dale Schultz at the time, according to the Wisconsin State Journal.

Walker's AOC dig Gets Surreal: It's looks like Walker has never had to worry about paying for Tonette's hair salon bill. For some reason, Walker pounced on this...

Conservatives will take any opportunity they can get to rag on Rep. Alexandria Ocasio-Cortez (D-N.Y.) for being a normal human being. For example, many expressed outrage upon learning that she spent $300 (plus tip) on a haircut and color. The fact that she paid someone a fairly average amount of money for a necessary service sparked fake outrage amongst her haters, who apparently think her criticisms of the rich mean she should not pay skilled workers for their time and talents. One critic, in particular, former Wisconsin Governor Scott Walker (R), took aim at Ocasio-Cortez Saturday. 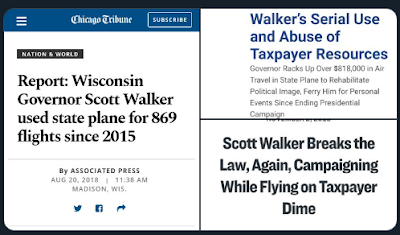