It costs a lot to keep Americans healthy, and Republicans have a problem with that.

The conservative Wisconsin Institute for Law and Liberty (WILL) has recently joined forces with Republican legislators to push back against any future problems selling their backward agenda that favors profits over Wisconsinites positive health care outcomes under Medicaid expansion, despite proof to the contrary.

As Governor, Tony Evers can now explain and compare what polling has revealed to be popular public policies, with the GOP's costly, failing, and stagnant draconian agenda claiming health care should be private, profitable, and a privilege.

WILL thinks their "institute" of right wing propaganda backed by predetermined research outcomes will muddy the waters enough to keep conservative voters from ever catching on to their purely ideologically driven agenda.

But discrediting reality and logic...well, that's not gonna be easy.

A September Wisconsin LFB report showed taking full Medicaid expansion beginning in 2020 would give the state an additional $280 million to work with over the next two-year budget cycle.

Wisconsin has missed out on $1.1 billion in federal money since 2014, according to the nonpartisan Legislative Fiscal Bureau. The state would save about $513 million over the course of the next two-year budget, which runs from July through June 2021, if it accepted federal money for full Medicaid expansion, the Fiscal Bureau said.

What was the dead giveaway this was a Medicaid expansion hit job? Besides the fact that the study oddly came out right before Evers planned to release his budget, Republican legislators were right there with WILL pushing this nonsense. Could they be more obvious? Seriously, you can't make this stuff up: 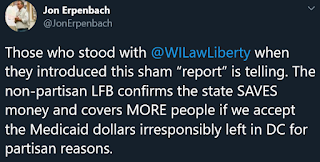 Less than two weeks from the rollout of Gov. Tony Evers’ budget, Republican lawmakers are touting a health care study, by the conservative WILL and UW-Madison economics professor Noah Williams, (that) found expanding Medicaid in 2020 would increase private insurance consumer costs by $1.145 billion while saving state taxpayers $545 million, for a net cost to the state of about $600 million a year.

The conclusions drew sharp criticism from Donna Friedsam, health policy programs director of UW-Madison’s Population Health Institute. “This study has several methodological and analytical flaws that substantially compromise the validity of its conclusions,” Friedsam said ... pointed to mathematical errors and problems with the study’s conclusion that health care spending is higher in Medicaid expansion states.


Friesam added most economists reject the reasoning that private sector health care costs would increase because health care providers would pass on costs from low Medicaid reimbursement rates to consumers.

According to the non-partisan Kaiser Family Foundation research data, and contrary to WILL's spin:

1. As a whole, the large body of research on the effects of Medicaid expansion under the ACA suggests that expansion has had largely positive impacts on coverage; access to care, utilization, and affordability; and economic outcomes, including impacts on state budgets, uncompensated care costs for hospitals and clinics, and employment and the labor market.

3. Economic measures: No significant increases in state spending from state funds as a result of the expansion through 2015 ... Medicaid expansions result in reductions in uncompensated care costs for hospitals and clinics as well as positive or neutral effects on employment and the labor market.

4. Medicaid expansion is having a disproportionately positive impact in rural areas in expansion states, where growth in Medicaid coverage and declines in uninsured rates have exceeded those in metropolitan areas.

5. No studies have found negative effects of expansion on employment or employee behavior.

6. Two studies found significantly greater increases in cancer diagnosis rates (especially early-stage diagnosis rates), and another study showed an association of expansion with an increase in the probability of early uncomplicated presentation for patients admitted to hospitals for one of five common surgical conditions.

7. Medicaid expansion is associated with Medicaid spending on medications to treat opioid use disorder and opioid overdose.

8. Found expansion to be associated with improvements in disparities by race and income, education level, and employment status

9. Significant reductions in out-of-pocket medical spending. Multiple studies found larger declines in trouble paying as well as worry about paying future medical bills in expansion states relative to non-expansion states ... significantly reduced the percentage of people with medical debt, reduced the average size of medical debt, reduced the average number of collections, improved credit scores, reduced the probability of having one or more medical bills go to collections in the past 6 months, and reduced the probability of a new bankruptcy filing, among other improvements in measures of financial security.

10. Documented provider reports of newly eligible adults receiving life-saving or life-changing treatments that they could not obtain prior to expansion. 281,282,283,284,285,286

12. A Louisiana annual report on Medicaid expansion reported that expansion saved the state $199 million in FY 2017 due to multiple factors, including the higher federal match rate for Medicaid populations that were previously funded at the regular state match rate, additional revenue from a premium tax on managed care organizations, and a decrease in state disproportionate share payments to hospitals as the uninsured population decreased. 308

13. A new study published in January 2018 found that Medicaid expansion was associated with improved hospital financial performance and significant reductions in the probability of hospital closure, especially in rural areas and areas with higher pre-ACA uninsured rates. 372

WILL would like us to forget the other states that have already provided real life health and economic outcomes that contradict their projected problems.

This is the same ploy Republicans have used to argue against the horrors of universal health care, even though every other country in the world depends on that system and pays only half of what we pay in the U.S..
Posted by John Peterson, Democurmudgeon at 2/20/2019 01:07:00 PM