Tightwad conservatives like to brag about saving money and voting in politicians that promise to cut taxes, because after all, why pay for the American standard of living when you can freeload off the investment made by past generations.

And yet these "freedom" loving 2nd Amendment zealots are just fine with the tragic consequences of their gun rights. The overly broad interpretation by activist conservative Supreme Court Justices, who started this ball rolling, should find it hard to sleep at night overturning a century and half of court decisions.

Thank god we're now talking about the cost of gun injuries, not just the sad and tragic gun deaths that are said to be the "price we pay for our freedom."

These gun violence victims cost everyone money. Sadly, if 20 children killed in an elementary school isn't enough, may taking a few bucks out of their pockets will make a difference for right wing low information voters.

The Journal Sentinel broke it down for us. Now, what's the excuse? 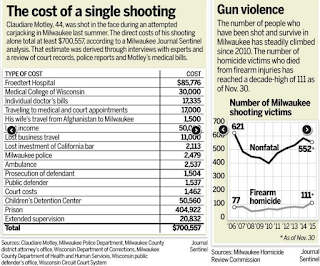 (After) Claudiare Motley (was) shot, it set off a cascade of costs, from the surgeons who repair damaged organs to the police who collect evidence and try to identify a suspect … The direct costs of his shooting alone were at least $700,557 … Of that amount, nearly 60% is to incarcerate and supervise a 15-year-old who shot him. An arrest, trial and conviction push the bill higher. Those costs spill out to the public. Motley had to cancel the trip, losing about $11,000 in prebooked travel arrangements, and was unable to contribute to the family business as he normally would. He estimates he was out about $50,000 in lost income.

Taxpayers foot the bill for the police, court and prison resources. In many cases, gunshot victims are uninsured and rely on government or charitable programs to cover medical costs. That's to say nothing of the societal costs — grief and anguish of loved ones, families living in fear, neighborhoods losing property values, people moving away and fewer businesses coming in. "We're all victims of gun violence in a very tangible way," said Philip J. Cook, a professor of public policy, economics and sociology at Duke University … 583 people survived gunshot wounds in Milwaukee last year.

Statewide, there were 349 hospitalizations and 742 emergency department visits because of firearm-related injuries in 2014 … About half of emergency visits and 60% of hospitalizations are covered by Medicaid or Medicare, which are public insurance programs. The total amount public insurance programs paid for gun-related injuries in 2014 was about $6 million.

More than a decade ago, Cook, the economist who studies the cost of gun violence, and his research partner found nearly half of the medical cost of treating gunshot wounds ends up being absorbed by government or charity programs. "With a very high percentage of that cost borne by the public, it ends up showing up in tax bills. It's a shared expense whether we are feeling charitable or not."