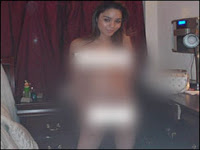 AP- Teenagers' habit of distributing nude self-portraits electronically - often called "sexting" if it's done by cell phone - has parents and school administrators worried. Some prosecutors have begun charging teens who send and receive such images with child pornography and other serious felonies. But is that the best way to handle it? "Hopefully we'll get the message out to these kids," says Michael McAlexander, a prosecutor in Allen County, Ind.

You know how kids “get the message” don’t you; they don’t. Dumb teenage kids should know better, but they’re still dumb teenage kids. To tag them with a felony charge of child pornography will sure look good on their job or college application. Way to go.

A teenage boy there is facing felony obscenity charges for allegedly sending a photo of his private parts to several female classmates. Another boy was recently charged with child pornography in a similar case. In some cases, the photos are sent to harass other teens or to get attention. Other times, they're viewed as a high-tech way to flirt. Either way, law enforcement officials want it to stop, even if it means threatening to add "sex offender" to a juveniles confidential record.

This month in Greensburg, Pa., three high school girls who sent seminude photos and four male students who received them were all hit with child pornography charges. And in Newark, Ohio, a 15-year-old high school girl faced similar charges for sending her own racy cell phone photos to classmates. She eventually agreed to a curfew, no cell phone and no unsupervised Internet usage over the next few months. If she complies, the charges will be dropped. In Pennsylvania, all but one of the students accepted a lesser misdemeanor charge, partly to avoid a trial and
further embarrassment.

Whatever the outcome, the mere fact that child pornography charges were filed at all is stirring debate among students and adults. Dante Bertani, chief public defender in Westmoreland County, Pa., where the students went to court, called the felony charges "horrendous." He says such treatment should be reserved for sex offenders, not teenagers who might've used poor judgment, but meant nothing malicious. "It should be an issue between the school, the parents and the kids - and primarily the parents and the kids," Bertani says. "It's not something that should be going through the criminal system."

Wes Weaver, the principal at Licking Valley High School, agrees that pornography charges or other felonies are not appropriate, noting that "the laws have not caught up to technology." But he says there has to be some way to educate students and their parents about the harm these photos can do. "I don't think we're anywhere near having a handle on this. It's beyond our scope as a school."

Certainly, technology makes it easier to do and say things we might not do in person, says Amanda Lenhart, a senior researcher with the Pew Internet & American Life Project. "But ultimately," she says, "I think this is merely another case of technology extending an activity or action that young people have engaged in for years, if not beyond that."

CBS News wrote: Roughly 20 percent of teens admit to participating in "sexting," according to a nationwide survey (pdf) by the National Campaign to Support Teen and Unplanned Pregnancy.
Here is one posted comment that seemed to hit the nail on the head:

Felony charges??? Come on these are just kids, they are not profiting from doing this and they are not sending them to any adult, an adult is not taking or requesting these pictures. Parents need to do their job and parent their kids.

So stop with the felony charges already.
Note: the picture above is actress Vanessa Hudgens.
Posted by John Peterson, Democurmudgeon at 2/05/2009 11:21:00 AM